The intent of this post is to give you a clear picture of the initial distribution of tokens for the AURORA protocol.

Each section should be self-explanatory but there are some methodological notes at the end. The charts will generally present the most conservative case when there is a choice. The accuracy or certainty of numbers may vary by category, as noted below.

This is the first token distribution schedule post for AURORA and all subsequent changes to the post will be noted in the Changelog section at the end so it is clear how up-to-date it is and what has changed between versions.

AURORA is an Ethereum compatibility solution created by the team at the NEAR Protocol, delivering a turn-key solution for developers to operate their Ethereum apps on a high-throughput, scalable and future-safe platform, with low transaction costs for their users.

AURORA is a product that helps Ethereum users and dApps to easily move to the NEAR blockchain. It allows to do two distinct things: upload and interact with Solidity smart contracts on NEAR blockchain and move assets from Ethereum to NEAR (including ERC-20 tokens). 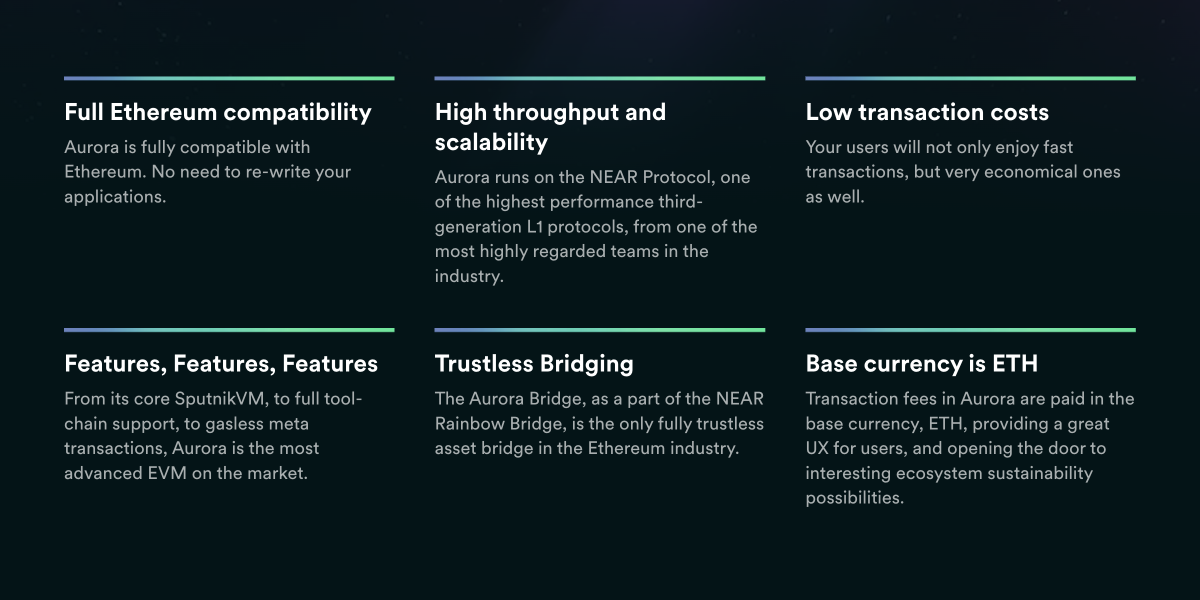 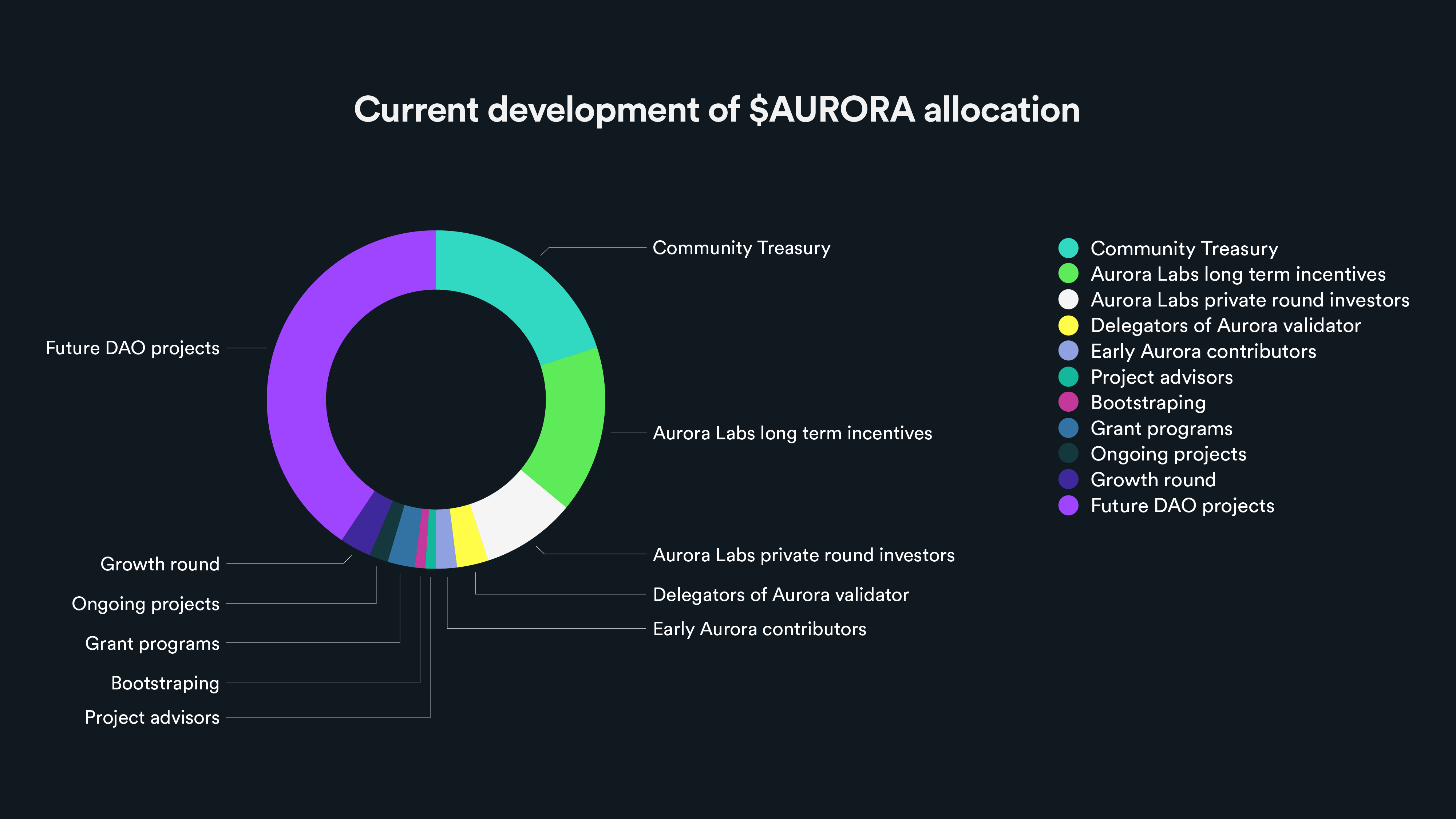 Part of the ‘DAO project’ bucket was allocated to Grant programs for the developers and talents that support development of the protocol. There is also allocation to the Ongoing projects which are currently represented by Bug bounty and Aurora Plus initiatives. 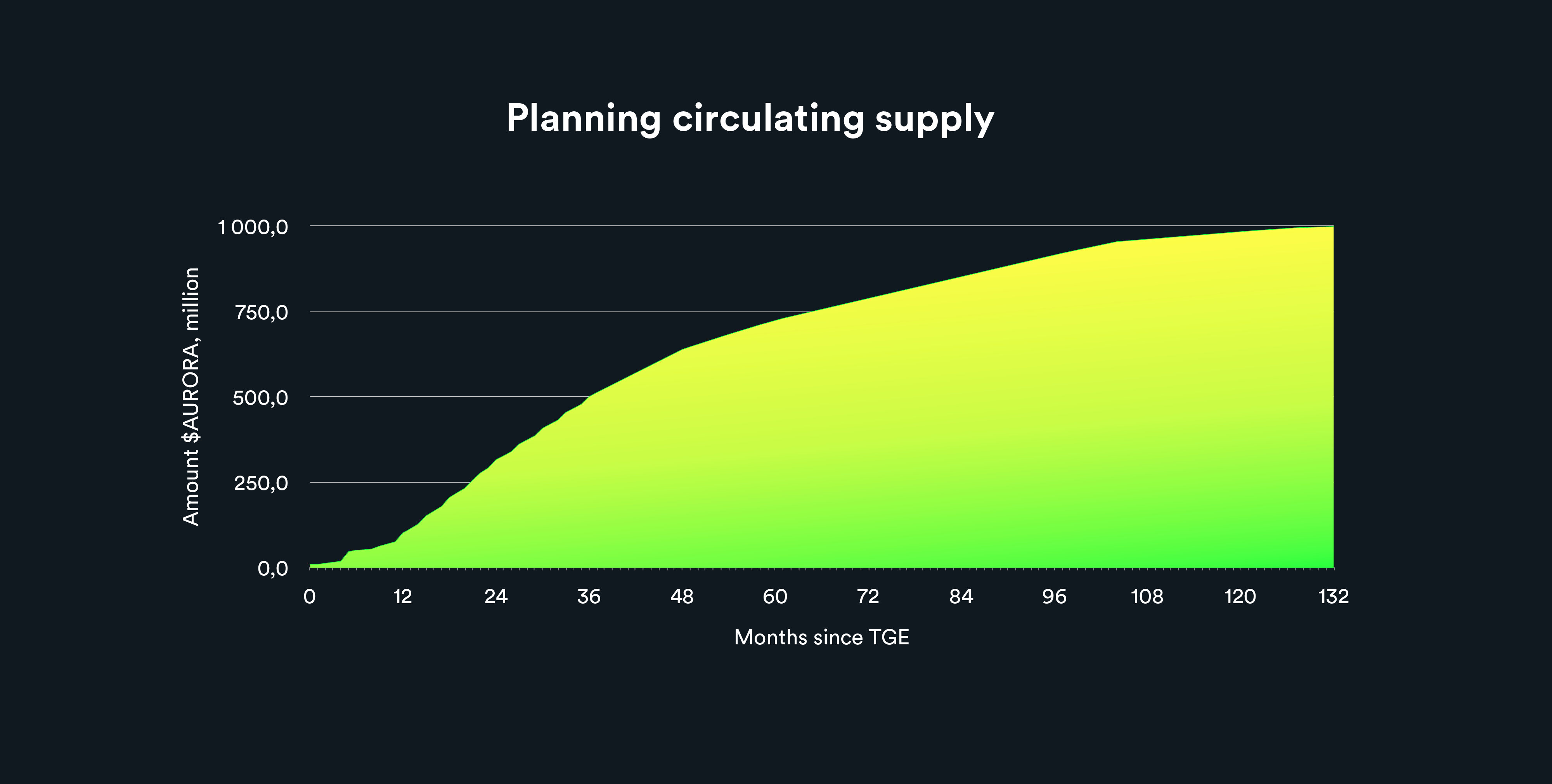 9% of all tokens was allocated to Aurora Labs private round investors. According to the most recent DAO decision from April 2022 with the following schedule: 2 unlocks of 3.25M AURORA in May and August 2022, 3.5M AURORA in November 2022 and 8 consequent unlocks of 10M AURORA on every third month starting from February 2023. All the tokens will be unlocked at the end of the month 36

AURORA protocol is being built by a talented and recognised professional team from the second half of 2020. Aurora Labs is a major contributor to the AURORA ecosystem. The focus of Aurora Labs is to develop AURORA tech, which includes Aurora Engine and Rainbow Bridge. Besides that, there are four new products that are in development at the moment: 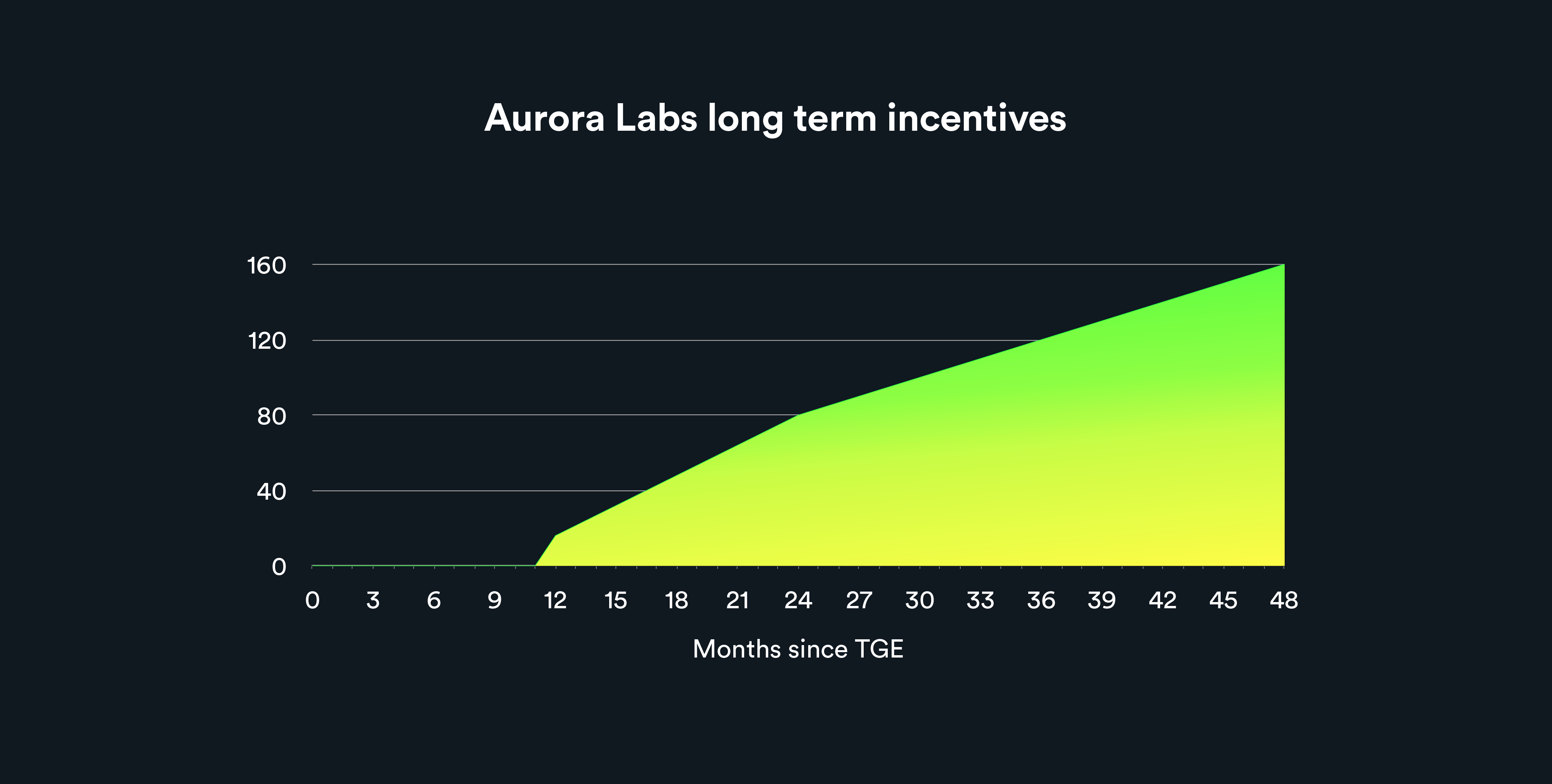 It's worth mentioning that not all of the AURORA tokens have been allocated to the team already: there is an unallocated supply kept for the future growth of the team. From this supply the vesting agreements for the newcomers are funded.

As it was stated by the DAO previously, 200 million AURORA tokens are devoted to the community treasury. AURORA token holders should be able to decide on the distribution of these tokens to the initiatives and projects that are planning to launch on Aurora.

It's expected that community voting mechanics will be implemented in the third quarter of 2022 and the Aurora community will be able to allocate its treasury to the most promising projects. 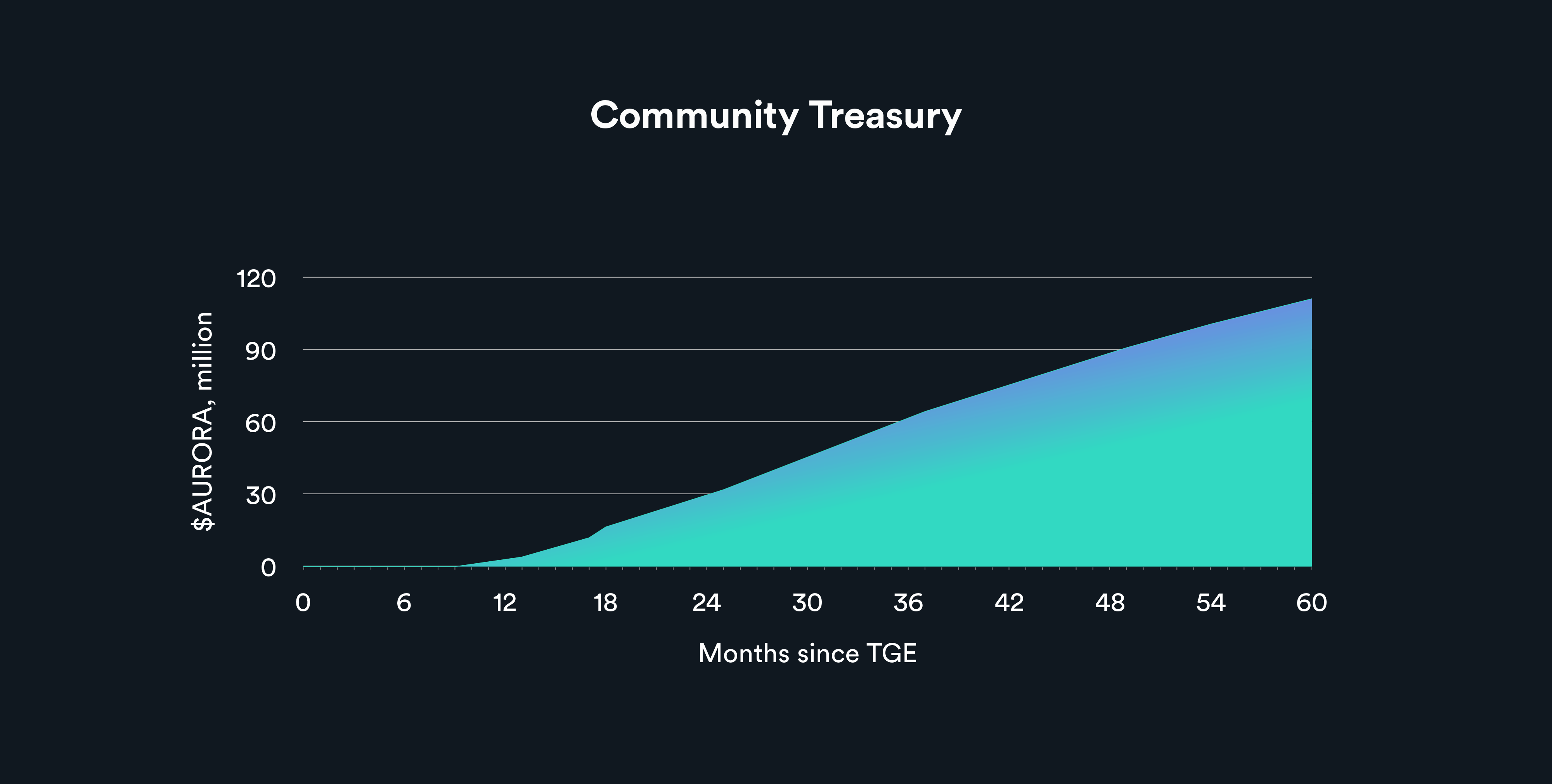 Aurora DAO has voted on the allocation of 3% of AURORA tokens (30M) to Aurora Labs on 18th of April 2022 in this proposal, to conclude a growth round. Because of unfavorable market conditions, Aurora Labs decided to delay the round. Below is the planned distribution of these tokens to growth round investors. 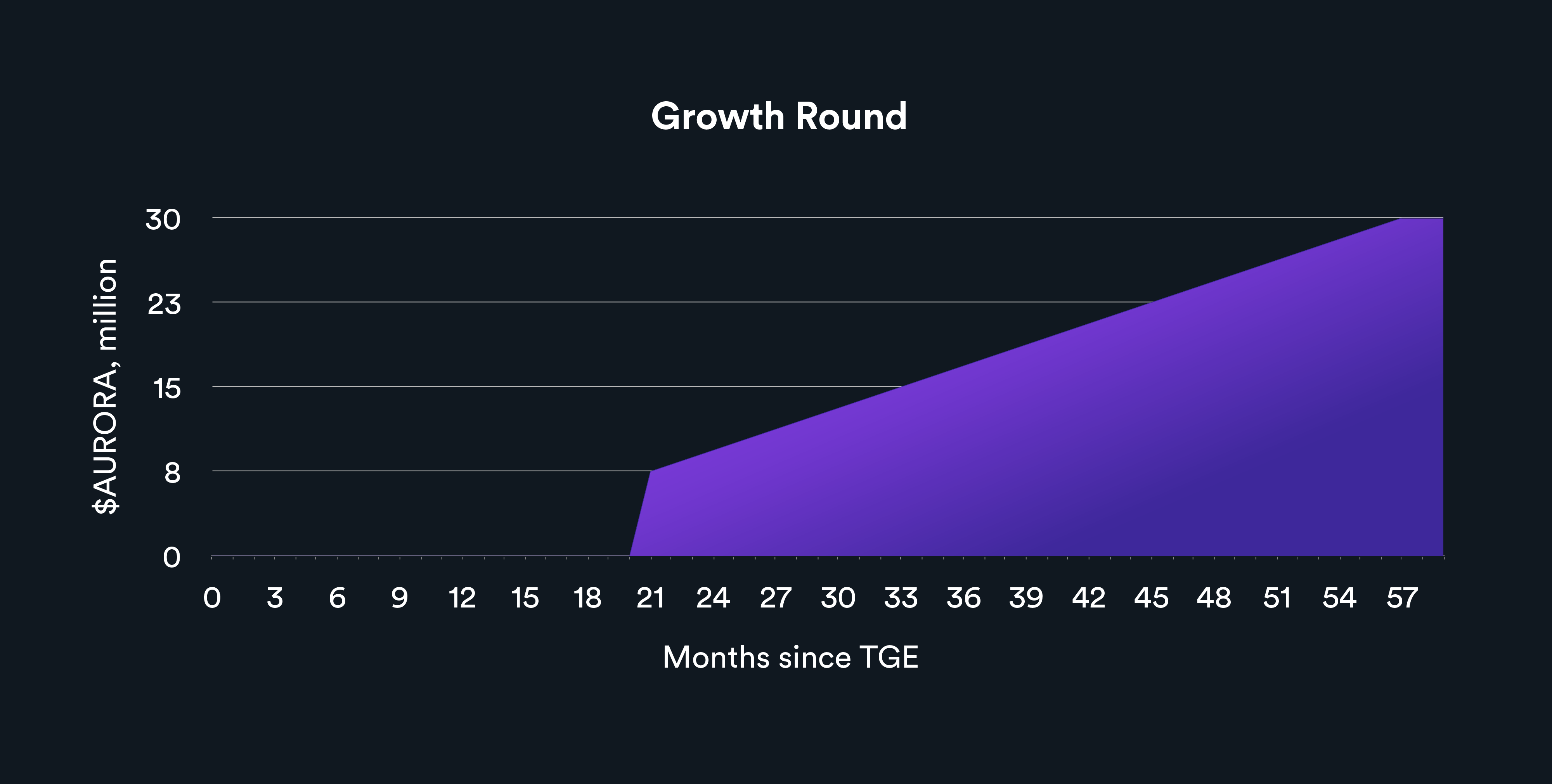 The below chart presents only 36 months from the TGE. 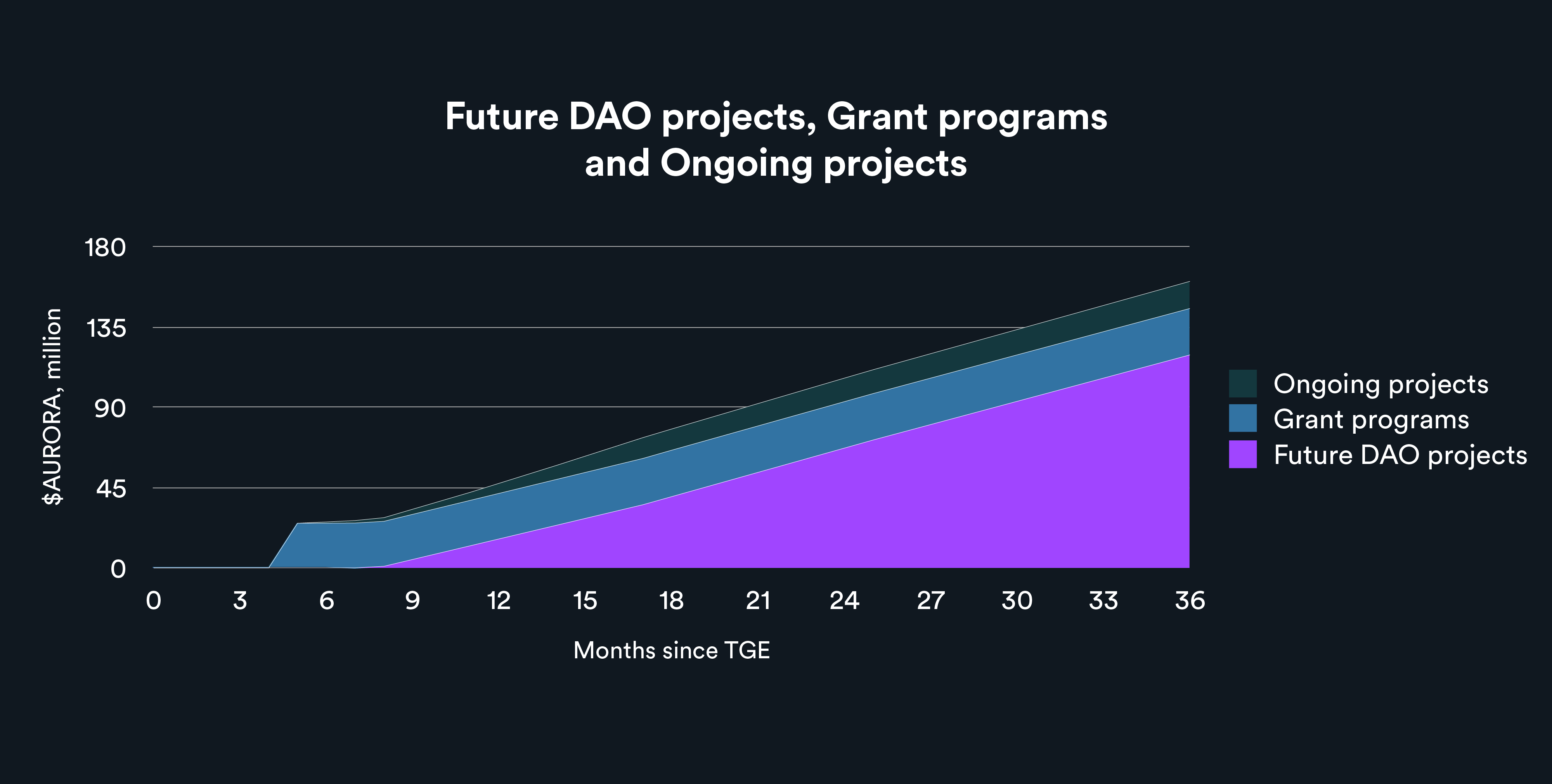 AURORA will update the above information regularly. If you are interested in analytics and exploring these numbers (or if you find errors/inconsistencies), please feel free to create tools or views and let us know at [email protected] Some of these tools may also be eligible for grants. If you are interested in building on AURORA please submit your ideas to https://aurora.dev/grants or find your career opportunities on https://auroralabs.dev/. There are some for you even if you don’t have a blockchain background.

Appendix B: Initial distribution and changes applied to it until June 2022